In December 2020, Milrem Robotics and the European Commission signed the grant agreement of the new iMUGS (Integrated Modular Unmanned Ground System) project. This project aims at developing the European standard unmanned ground system (UGS). The requirements for the standardized UGS have been set by seven EU member states: Estonia, the leader of the project, and Belgium, Finland, France, Germany, Latvia and Spain. The named countries are collectively financing 2 MEUR of the 32,6 MEUR budget. 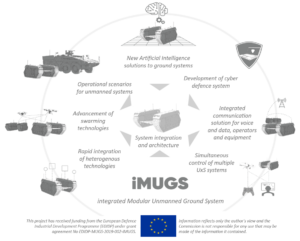 From the Belgian side, two companies and the Royal Military Academy are included:

RMA will lead the sub-project on swarming, developing capabilities, enabling heterogeneous teams of robots to work as a group towards a common objective.

dotOcean is member of the swarming team and develops algorithms to enable teamwork and cooperation in a fleet of networked robots.

“This project expands the current capabilities of dotOcean to control fleets of networked unmanned vehicles over the internet, to more advanced methods. Robots are capable of communicating and sharing large quantities of information leading to real cooperation among them. The information can be used to automate planning, coordination and task sharing between robots and humans, as such that they work as a team and perform optimally as a whole, even in constantly changing conditions.” explains Koen Geirnaert, CEO of dotOcean.

Europe is expected to need thousands of UGS during the next 10-15 years growing the value of the market into billions of euros. With seven participating nations and key industrial players, the UGS developed during iMUGS is expected to become the preferred European solution for integrating into armed units.

During iMUGS a modular and scalable architecture for hybrid manned-unmanned systems will be developed to standardize a European wide ecosystem for aerial and ground platforms, command, control and communication equipment, sensors, payloads, and algorithms. Addressed operational challenges include enhanced interoperability, increased situational awareness and faster decision-making. The system will utilize an existing unmanned ground vehicle – Milrem Robotics’ THeMIS – and a specific list of payloads.

“This project is key in our knowledge and product development,” explains Filip Verhaeghe, CEO of (UN)MANNED. “Thanks to our patented Sol-software that automates the software airworthiness certification we are the ideal partner to develop a ground station that not only controls a fleet of Unmanned Ground Vehicles but in addition meets the certification specifications required for the safe operation of Unmanned Vehicles.”

The outcome of the project will be demonstrated in operational environments and relevant climatic conditions as part of participating member states military exercises or at separate testing events. The first demonstration is planned already for the second quarter of 2021 and will be held in Estonia, while a demonstration will be held in Belgium in summer 2022.

“This project provides an excellent opportunity to translate our lower-level technology-readiness-level competencies with respect to heterogeneous multi-agent collaboration, often obtained in civilian applications such as search and rescue, towards actual field-deployable military solutions that can enhance the capabilities of our troops”, said Geert De Cubber, Team Leader of the Robotics & Autonomous Systems Unit at RMA.

During the project operational know-how will be gathered and concepts for the combined engagement of manned and unmanned assets developed, while considering the ethical aspects applicable to robotics, artificial intelligence, and autonomous systems. State-of-the-art virtual and constructive simulation environments for specific mission will also be set up. Important to note is that ethical considerations are incorporated into the project design and that the developed system will always be under meaningful human control.

The objectives of the EDIDP programme are to contribute to the strategic autonomy of the European Union and to strengthen the cooperation between Member States. The priorities include enabling high-end operations of military forces with special focus on intelligence and secured communications and cyber. Actions include development of next generation ground combat capabilities and solutions in Artificial Intelligence, Virtual Reality and Cyber technologies.