Innomar Technologie GmbH from Germany and dotOcean NV from Belgium joined for a technology demonstration in June 2018 in Bruges. The autonomous operating platform Calypso was equipped with a portable parametric sub-bottom profiler and tested on a small and shallow lake in town. A dense line grid with one metre line spacing was surveyed autonomously by the vehicle. Data can immediately be gridded right after acquisition and a 3D cube with 50 cm lateral cell size was visualized with a volume renderer. Such approach is unique for shallow water environments, because traditional sub-bottom profilers are too heavy and too difficult to operate on small platforms, can often not be used in shallow waters and do not provide the required lateral and vertical resolution. Due to the high repetitivity of the control module, the autonomous platform allows for the acquisition of coherent coverage data sets with small line spacing, which any man driven boat will fail to achieve.

The Calypso platform consists of an unmanned, inflatable and therefore extremely portable floating body with mounted thrusters, batteries, GPS receiver and control module. It uses a 4G Cloud Link for the auto-navigation module, self-steering control and data visualization. Mission planning and immediate data visualization is done via a tablet (Figure 1) or via a server application running in a web browser. A rectangle is drawn by hand or entered through a CSV file, where data needs to be collected. Line spacing (1 m) and line speed (0.7 m/s) are set to ensure optimal data coverage. 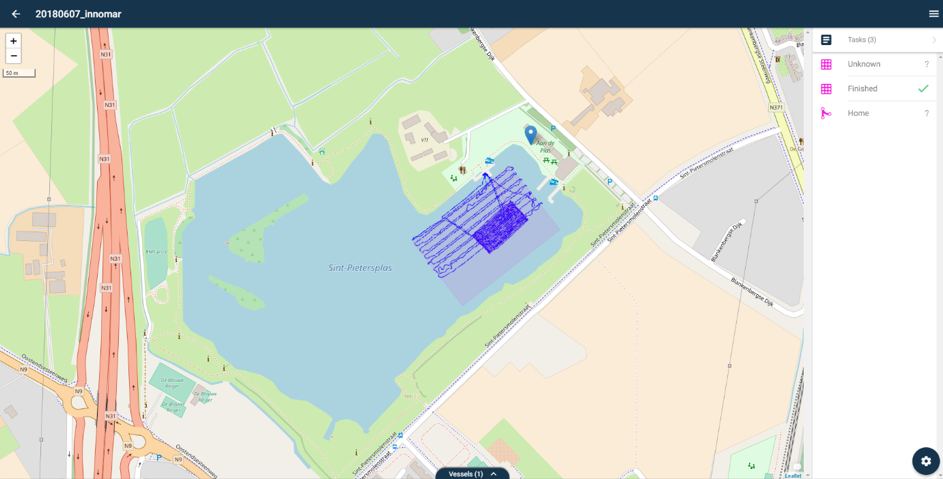 Figure 1: The intuitive tablet interface allows the user to draw the position of the 3D seismic block and enter a required line spacing and line speed to have optimal data coverage. Repetitive sailing patterns maintain the optimal coverage, even when Calypso is not perfectly on its‘ line

Access to any waterbody would be possible and mobilization is very fast, e.g. in this experiment it took less than 30 minutes. The parametric transducer was mounted directly below the floating body and the transceiver was placed on top of the float (Figure 2). 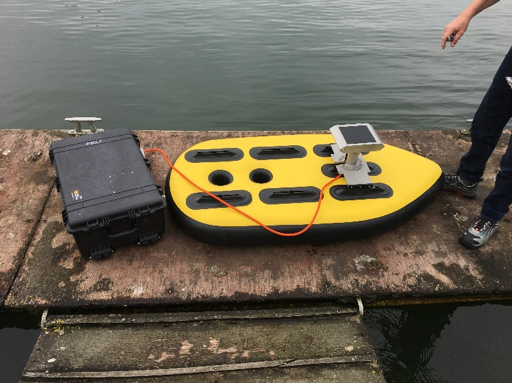 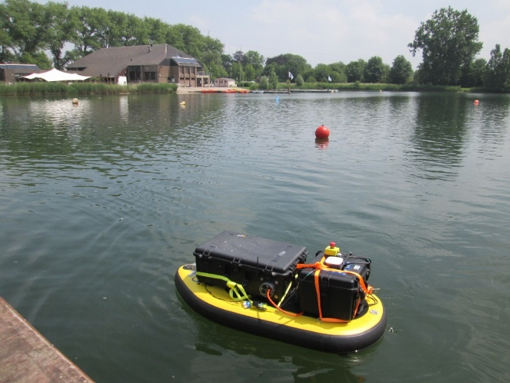 Access to the parametric sub-bottom profiler was realized via WLAN connection for quality control during acquisition. A line grid of 80 m x 40 m with a spacing of one meter was planned and surveyed by the vehicle automatically. Additionally, some regional lines of 200 m length were surveyed on the lake with an average water depth of 4 m. The entire mission was finished in a two hours’ time span (Figure 3). 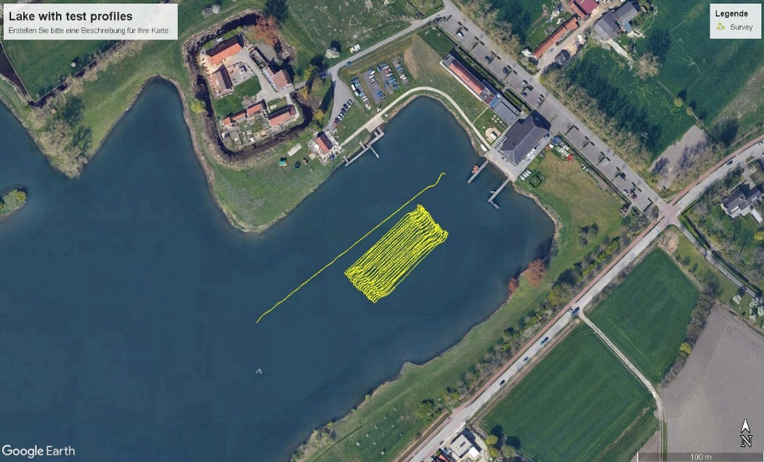 The SES-2000 smart system collects two data channels, one with 100 kHz for accurate bathymetry and the second one with 10 kHz for high resolution sub-bottom data. The 10 kHz data channel is sampled as full wave form data and we recorded more than 40 pings per second, which allows for object detection applications. The parametric signals have a broad band width, do not show any ringing effect and therefore, provide sub-decimeter resolution vertically (Figure 3).

Directly after data acquisition all data are downloaded from the vehicle and immediately processed. Standard seismic processing methods, such as band filters, envelope filters and noise reduction are applied. A gridding tool will transfer the irregularly distributed traces into a rectilinear grid. We used a cell size of 50 cm laterally and 1 cm vertically. This 3D cube was quickly visualized with a volume renderer (Figure 5). The 3D volume reveals some small seabed features, several sub-bottom reflectors in the area, but also accumulations of gassy sediments as highly reflecting areas with acoustical blanking. 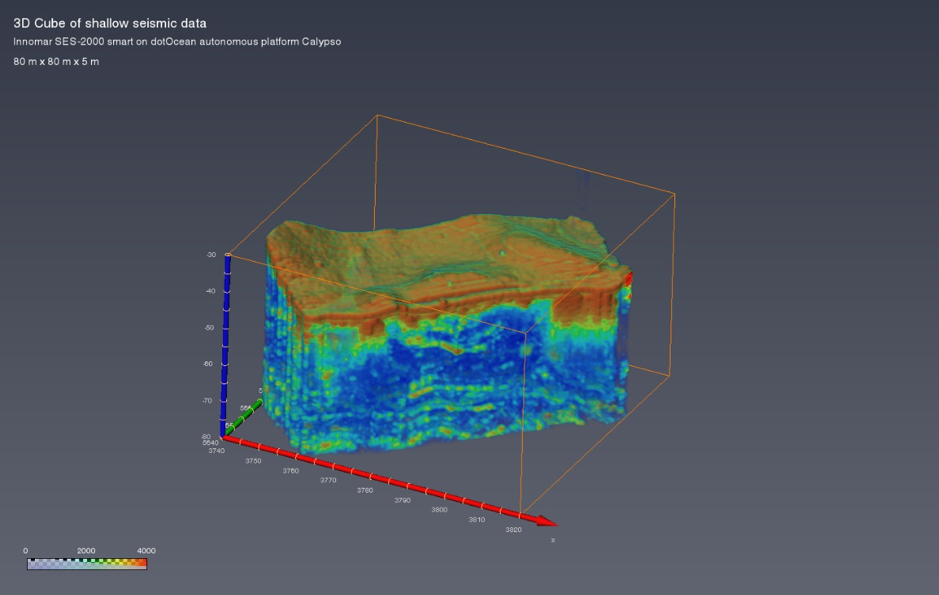 The true volumetric data set allows for clip planes to be applied in order to investigate the internal morphology and to detect objects and structures within (Figure 6). 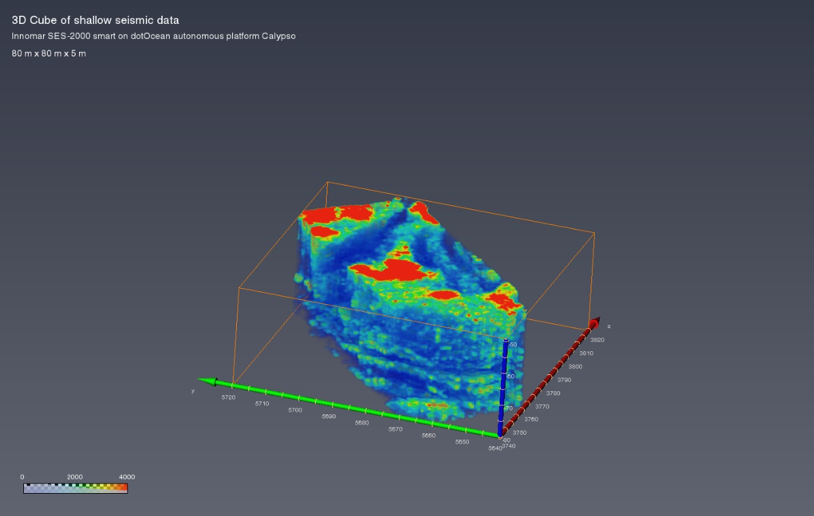 Such rapid acquisition of 3D volumetric data is unique in the hydrographic and geophysical survey business. This technology approach allows for a range of applications, including dredging, pre-site investigation of marine construction areas, environmental surveys, object detection, UXO applications and marine archaeology. The fast mobilization/demobilization and collection of coherent data sets is very time efficient and the unmanned autonomous platform provides easy access to areas where it would be difficult to mobilize man driven boats.